“Stay true to yourself, yet always be open to learn. Work hard, and never give up on your dreams, even when nobody else believes they can come true but you. These are not cliches but real tools you need no matter what you do in life to stay focused on your path. ” ~ Phillip Sweet

“Be willing to take the first step, no matter how small it is. Concentrate on the fact that you are willing to learn. Absolute miracles will happen.” ~ Louise Hay

“The Grand Canyon is carven deep by the master hand; it is the gulf of silence, widened in the desert; it is all time inscribing the naked rock; it is the book of earth.” ~ Donald C. Peattie

The bighorn sheep originally crossed to North America over the Bering land bridge from Siberia and is named for its large horns that can weigh up to 14 kg (30 lb), while the sheep themselves weigh up to 140 kg (300 lb). The population in North America peaked in the millions, and the bighorn sheep entered into the mythology of Native Americans. By 1900, the population had crashed to several thousand, due to diseases introduced through European livestock, over-hunting, and competition from ranching.

A program of reintroduction, natural parks, and reduced hunting, together with a decrease in domesticated sheep near the end of World War II, allowed the bighorn sheep to make a comeback. (1)

Recent genetic testing indicates three distinct subspecies, one of which is endangered – Sierra Bighorn: unique to the Sierra Nevada mountains of California and listed as a federally endangered subspecies in 2000. Today, about 500 Sierra bighorn remain in the wild. The Rocky Mountain bighorn sheep are found from British Columbia to Arizona, including Northern New Mexico.

Bighorn sheep were gone from the Rio Grande Gorge until 2006, when the Taos Pueblo released 23 onto the land. The Department of Game and Fish followed with the release of 25 additional bighorns in 2007. Since then (10 years), the population has multiplied to 280. (2) 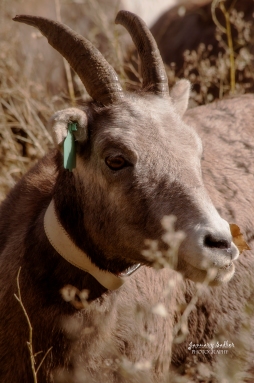 Rocky Mountain bighorn sheep can regularly be observed within the Bureau of Land Management’s Rio Grande del Norte National Monument and are protected.

A good area to view them is the West Rim Trail that extends from the rest area west of the Rio Grande Gorge Bridge on U.S. 64 and runs south along the canyon rim to Route 567 above the Taos Junction Bridge.

Also, down into the gorge, along the river, North of Pilar, NM.

Keep in mind that while the sheep can outmaneuver smaller predators, there are mountain lions/bobcat kills.

As always, give the animals space, respect their natural habitats (no littering or destroying property), and be cautious on roads – slow down! Last year alone, three rams were killed in traffic collisions on the eastern side of the gorge. (3) 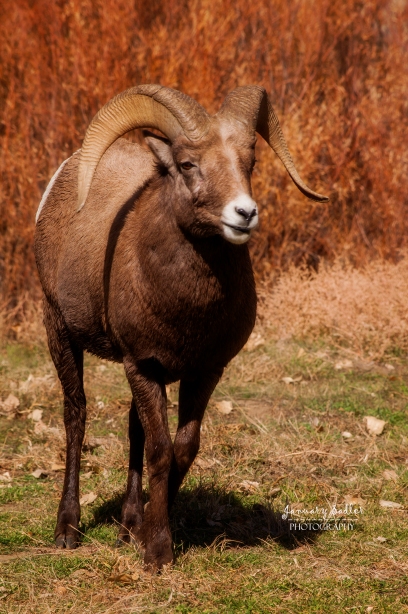 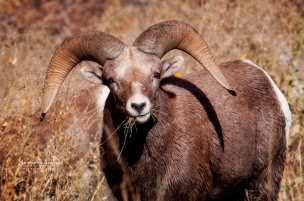 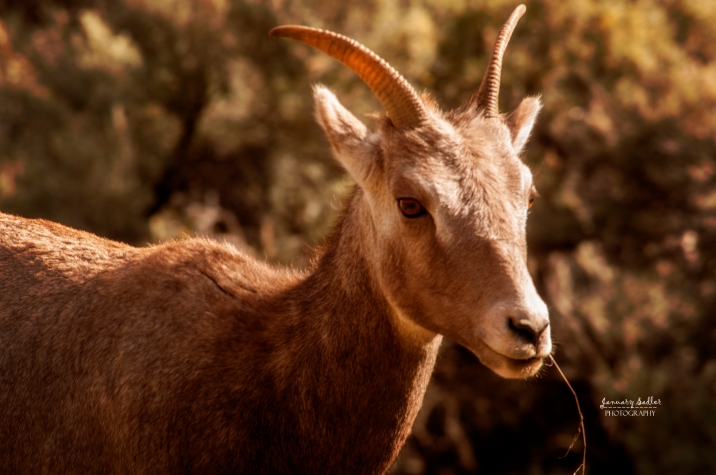 Now living in NM for over 10 years and traveling most of the state, I can say that Jemez is still one of my favorite places. The Jemez Mountain Trail is not something that should be passed up.  Google Map here

From start to finish, it’s a 16 1/2 mile section of stunning Jemez, NM. If coming from the south, you will drive through a Native Pueblo (be sure to obey speed signs, they are strict because of children, dogs, etc), then a red rock cliff that is worthy of a quick stop for photos.

(This monument has exhibitions and self-guided tours. Ranger-guided tours are also given upon request.)

“The pueblo was first built in the AD 1500s by ancestors of the modern residents of Jemez Pueblo. The Jemez people lived a typical Southwestern lifestyle for that time. They raised corn, beans and squash in Jemez Canyon along the Jemez River and also up on the nearby mesas. They hunted deer, rabbits, elk, and other game from the forests. They had plenty of water from the Jemez River, and hot springs nearby. In the best of times they may have had a somewhat idyllic life, but the climate could be fickle.

Jemez State Monument consists of the ruins of an ancient pueblo of the Jemez people known as Giusewa and the ruins of a 17th Century Spanish mission known as San Jose de los Jemez. The mission had a unique octagonal-shaped bell tower.” (JSM)

A unique waterfall that is part of a natural dam, made from calcium deposits. It dates back roughly 5000 years. The water flow continues to erode the dome and the shape has changed since my first visiting the area in 2008.  You can walk across the top, climb into the small cave, or sit in the river enjoying to roaring waterfall sound. There have been times where it freezes in the winter. There is a mild sulfur odor but not at all hindering the experience. 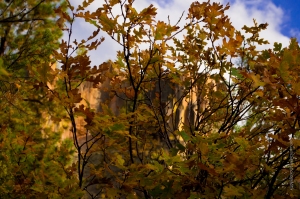 Next stop is Battleship Rock – –

Battleship Rock is a 200 ft. tall natural land form of volcanic rock, resembling a Navy warship. The East Fork Jemez and San Antonio Rivers join at the picnic area and offer a cool streamside environment for family picnics, fishing and hiking. There are 33 day use picnic sites with grills, with restrooms and drinking water available. This picnic facility is designated as a reduced impact and recycle picnic area, visitors are encouraged to recycle and pack out trash. Cutting live vegetation is prohibited. Charcoal only in pedestal cooking grills. 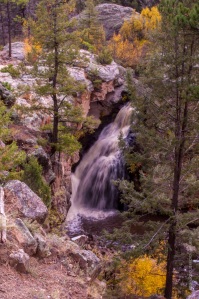 Located at an altitude of 7,880 ft above sea level, the river drops 70 feet through a spectacular series of falls. There is a picnic area, hiking, fishing, and camping, info here. The falls are accessible from the trail that starts at the Jemez Falls campground and day use area. There is an overlook at the end of the trail.

I highly recommend, after Jemez Falls, to continue heading East (7 1/2 miles) to drive through the Valles Caldera National Preserve – yes, a caldera (more info here). There is a visitor area and loads of photo opportunities – sometimes there are elk close by!

“There is nothing so American as our national parks. The scenery and the wildlife are native. The fundamental idea behind the parks is native. It is, in brief, that the country belongs to the people, that it is in process of making for the enrichment of the lives of all of us. The parks stand as the outward symbol of the great human principle.” ~ Franklin D. Roosevelt 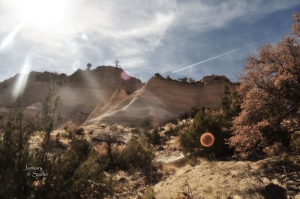 “Vision connects you. But it also separates you. In my work, and my life, I feel a desire to merge. Not in terms of losing my own identity… but there’s a feeling that life is interconnected, that there’s life in stones and rocks and trees and dirt, like there is in us.” ~ Bill Viola

Ghost Ranch is a 21,000-acre retreat and education center located close to the village of Abiquiú in Rio Arriba County in north central New Mexico, United States. Over 300 classes are offered each year in this beautiful setting.

200 million years ago Ghost Ranch and the American Southwest were located close to the equator, and had a warm, monsoon-like climate with heavy seasonal precipitation.Ghost Ranch includes a famous palaeontological site preserving Triassic dinosaurs. Fossil bones were found here as early as 1885

Ghost Ranch’s redrock scenery attracted many like Georgia O’Keefe, who fell in love with the geography, and soon split her time between living in New York and New Mexico. It also has attracted many filmmakers over the years. Including:

To say that this place is beautiful is an understatement that also shows in the photo above. Seeing something this stunning in a photo is nothing compared to seeing it with your own eyes. I highly recommend going there and be sure to visit the Anthropology museum.

In 1733, General James Oglethorpe named Jekyll Island in honor of Sir Joseph Jekyll, his friend and financier from England. In the late 1800s, Jekyll Island became an exclusive hunting club for families with names like Rockefeller, Morgan, Vanderbilt, Pulitzer, and Baker. The once private retreat is now part of The Jekyll Island Club National Historic Landmark District, one of the largest preservation projects in the southeast.

In 1947, the Governor and the Georgia state legislature established Jekyll Island as a State Park. To read more history, click here 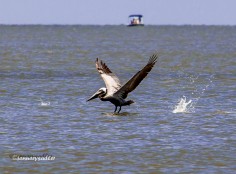 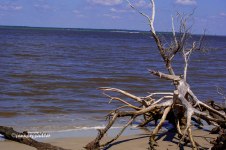 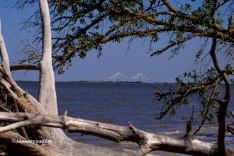 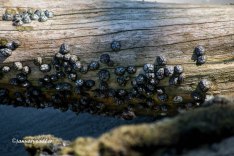 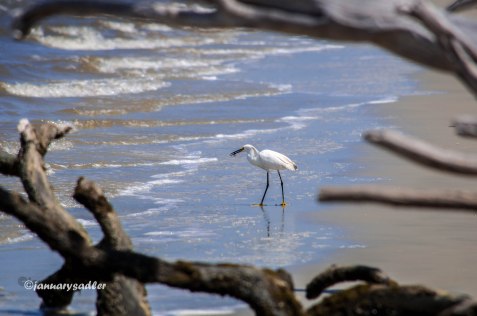 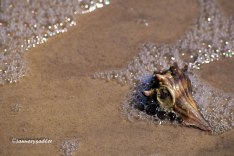 My husband and I went to Jekyll Island, GA for our 21st wedding anniversary. To say this place is lovely, is putting it too mildly — it’s gorgeous!

We arrive Saturday (May 21) evening and walked along the Northside Beach with a full moon light dancing along the waves. We stayed at a hotel in Brunswick, a small town outside of the island, and came back Sunday morning. For the small amount of $6 to get into the park (this parking ticket lasts for 24 hours), there was so much to do – beach, biking, hiking, boating, fishing, picnicking, camping, water slides, turtle education, and more – we will definitely be going back!

A small shout-out to Larry’s Giant Subs for making such delicious subs for lunch!